You are here: Home / Hearing London

NEWS and ACTIVITIES AFTER THE HEARING 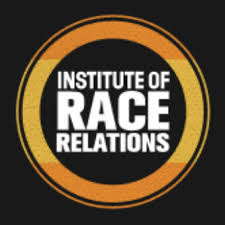 The Institute of Race Relations hosts Social Movement Unionism and the Global Uprising Against Poverty Wages
Presentation and discussion of Annelise Orleck’s pathbreaking book ‘We are all fast-food workers now’. Also speaking Khadija Najlaoi from Waling Waling. The meeting will also launch the PPT’s new publication ‘How the Hostile Environment creates Sites Without Rights’. 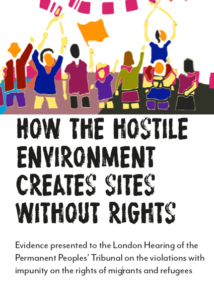 9th of November a stakeholder conference will be held on Hostile Environments and Struggles for Justice to discuss common injustices faced by migrants and citizens in the UK., organised by co-convenors of the of the Permanent Peoples Tribunal session on the Human Rights of Migrants (London, 3-4 November 2018), Waling Waling and the research project ‘ETHOS – Toward an empirically informed theory of justice and fairness’.

The conference will culminate in a common statement on ending Hostile Environments in and beyond migration policy. The conference will also present the book “How the hostile environment creates sites without rights”  , which presents the various evidence presented to the London Hearing of the Permanent Peoples’ Tribunal on the violations with impunity on the rights of migrants and refugees.

Since Theresa May’s pledge in 2012 to create a ‘really hostile environment’ for migrants, the politics of exclusion and austerity has made the United Kingdom an increasingly hostile place to live for citizens as well. By bringing together migrant rights activists and other groups seeking to create a more just world, this event will highlight the connections between different struggles and promote more inclusive and effective political action. It will also consider how academic institutions such as Migration Mobilities Bristol can be mobilised to support these struggles.

Evidence presented by Liz Fekete on behalf of the PPT at the APPG on Race and Community & APPG on
Migration Putting People First: Protecting Public Services from the Hostile Environment,
4 April 2019, Committee Room 9, Palace of Westminster.

Thank you for your solidarity during the PPT Session in London putting the Hostile environment on trial"
Evidences were presented on the working  and living conditions of migrants and refugees living and working in United Kingdom and other countries in Europe.

We would like to thank everyone. Your contribution towards preparation of  the session in London made it possible for the working group to organise the hearing.

The hearing was just the beginning of the process where we seek to bring visibility to the systemic character and systematic scale of the human rights violations of migrant and refugee peoples, specifically in the policies and measures adopted to manage migration in United Kingdom and other countries in Europe.

Acknowledgement to all of you who:

Thank you for the financial support that was given by different organisations that was very instrumental. Thank you to the Friends House who supported as well with the venue and Waling Waling for the food of the organizers and participants.